The History of 1 Lewes Crescent

3 The Duke of Fife

No 1 Lewes Crescent was bought in 1829 by the William Cavendish, 6th Duke of Devonshire. The Duke had the property decorated by John Gregory Crace in 1848, and lived there until his death in 1858.

The Duke of Devonshire’s house at No.1 Lewes Crescent was bought by Mr. John Elger, who was proud to have been the first pupil that Mr. Thomas Cubbitt had. He made a very large fortune as aspeculating builder and was the builder of Albert Gate, London. He once said tothe writer, “It is 50 years ago today that I went to Thomas Cubbitt as his first pupil”. Mr. Kelk, the builder of the 1862 Exhibition, used to visit him there. Mr.Kelk was also a pupil of Mr. Cubbitt. John Elger, listed in street directories at 1 Lewes Crescent 1859-1888.

Sir John Kelk, was trained as an architect, as was John Elger. He became a speculative builder, at one time in partnership with Elger.

3.The Duke of Fife

The Duke of Fife lived in the property from 1896, with his wife, Princess Louise, the daughter of King Edward VII. The house was named Fife House at that time. King Edward visited the house on a number of occasions, most notably staying there during his convalescence in 1908. It was for this reason that the King’s toilet was installed in the house. Princess Louise lived in the property until 1924.

An elegant weathercock on the roof could be read from indoors by a dial on the upper staircase.

In recent times. Patrick Baty was commissioned to carry out limited paint analysis in four areas of No 1 Lewes Crescent – the Dining Room; first floor Landing; the Entrance Hall and Drawing Room. Samples were also taken from the railings.

Some elements of the Dining Room displayed fifteen decorative schemes of decoration. This may be at odds with Antony Dale’s assertion that the room was seldom used by the Duke. It was thought that he preferred to dine on the first floor of No 14 (next door). The joinery in the room was originally grained in imitation of a pale wood, probably satinwood, as was found at nearby 13 Brunswick Square. Mahogany graining appears at a later stage. The walls, in particular, were very interesting as they displayed a considerable number of arsenical green schemes.*

From 1947 and for most of the rest of the 20th century, Fife House was the home of the Weston family, who founded and ran the nearby Nevill House Hotel.

Mary was born in Chesham street but was brought up in Fife House. She spent 2 years at St Mary’s Hall and remembers sleeping in the sick bay at 21/22 Sussex Square when she was ill.She and her sister-in -law to be, Jean boarded at 3 Chichester Terrace the school dormitory and remember lying in bed gazing at the intricately moulded ceiling every night.

Mary and her 2 brothers,John and Peter had great fun hiding and running up and down the hidden servants staircase in Fife house. There was a small flat at the rear of the big kitchen at Fife House where Alice,an old family retainer ,lived until she was in her 80s. Elsie the maid, also worked at the house for over 50 years. Mary was married to Cedric Joseph from Fife House in 1960. 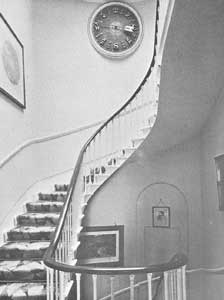 Upper staircase showing the dial connected to the weathercock 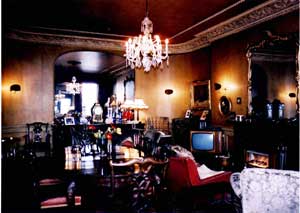